Great things are not done by impulse, but by a series of small things brought together – Vincent Van Gogh

Holidaying in Gods Own Country

Statistics on tourism in Kerala are all UP!! According to figures put out by the Government of Tourism, Kerala saw an 11.18 % increase in foreign tourist arrival in 2012. Domestic tourist arrival was up by 9.15%, so were foreign exchange earnings, which grew by 11.18% and total revenue from tourism grew 9.74%. Not bad during recessionary time and I’m not surprised by the numbers.

Its balmy winter in Bangalore, but we decided on an extended weekend in Kerala. We were driving down there for a colleagues wedding. Five in the morning, dawn is ready to break and our Punto rushed to get out of the city before it awakes. Beautiful four lane drives, mist flanking the road, plants lining the highway and occasionally a bright bunch of flowers too, the characteristic granite reliefs of the South, some excellent music and we were cruising at 100 kms per hour. Thank you Reeves Mathews for wonderfully managing the wheels!

A huge breakfast of blueberry pancakes, fresh fruits and croissants, at Salem and off we shot for lunch in Palakkad, Kerala. Simple yet tasty fair beef fry and parotas, on bone chain plats at a small yet well maintained restaurant along the highway, some awesome view works well with the wonderful food.

We were in Kerala for three whole days, all in Palakkad district, and we never encountered a bad road! Tree lined roads, with dividers and reflectors, 98% of drivers are well behaved and this is another feather in Kerala’s cap.

After my first encounter with beef, I decided that the weather, which is hot and humid like all coastal places, is just not conducive to red meat. And boy, was it the right decision. For subsequently, we really pigged out on some of the freshest and tastiest fish I have ever eaten. No small feat, considering I come from another coastal state just up North – Goa. 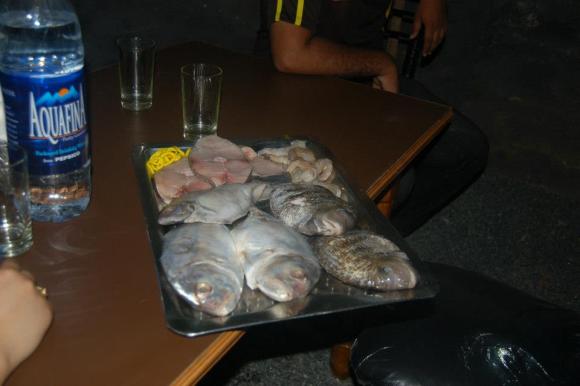 Unlike Goa, Kerala is neither overpriced, nor nauseously commercial. For hours you drive through villages of pretty modern homes, all painted in bright hues, and sitting midst a generous garden. The crush of people that you see in cities like Bangalore, is thankfully missing, the air is fresh and when the humidity gets to you, stop by for some tender coconut water, pickled pineapple or even tangy Amala. How’s that for a healthy snack?

We stayed at a beautiful hotel called Devaragam in the holy town of Guruvayur. Quiet, lovely airy rooms, polite staff, pleasant décor, and affordable, its shouting distance from the temple. December – January is Sabarimala season in Kerala and devotees invariable stop over at Guruvayur too. That explained the rush at the temple. 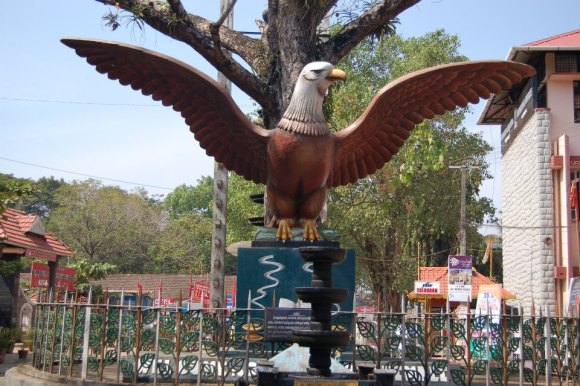 The Guruvayur temple is a very popular Krishna temple and is amazingly small and filled with wooden carvings and frescos. It reminded me that the temple was probably built for a much smaller population. It is auspicious to get married at this temple, so each year hundreds, or probably thousands of couples tie the knot here. Strangely, the religious ceremony lasts for 3-4 minutes and then it’s the turn of the next couple!

Post the wedding, which was an elaborate, grand occasion and typically Malyalee from ‘Oh My Gold’ fame, we drove down to Snehatheeram beach. Narrow, clean and uncrowded, the Snehatheeram beach mostly sees the local population and a few fishermen mending their nets. The beach is lined with coconut trees, the sand dunes and their vegetation still intact. We saw just one foreigner in all our time there, how she located the place is probably a credit to Google maps.

The next day saw a long drive along hairpin curves to Thirapally waterfalls. It seems some scenes of the Hindi movie Raavan were shot here. It’s a huge gushing barrage of water and you can see it both from the top of the fall or experience its might by going down to its foot.

Some great company, a sure driver who enjoys the road and Kerala can be super fun, affordable and of course memorable too.

Hi there, While professionally I am a marketer, my other passions include reading, writing - blogging in particular, and I run a little homestay in Goa. Like my page https://www.facebook.com/goaallyear and connect with me on Twitter @lilliangoa.